A collection of printable halloween stencils for you to try out this Fall.

Skip to the stencils

Whilst the way we celebrate Halloween today is very much an American tradition, its roots lie in the ancient Celtic festival of Samhain, a celebration of the end or death of the summer. The Celts believed that the dead were closer to the living at this time of year and conducted various rituals (including costumes and masks) to honour their ancestors and ward off evil. The tradition of carving turnips developed in Ireland, possibly during Medieval times, but perhaps dating back much further. 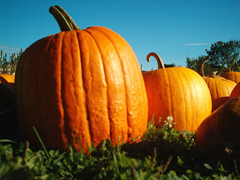 There is an Irish folk tale that talks of Jack, a lazy yet cunning farmer who uses a cross to trap the Devil. One story says that Jack talks the Devil into climbing an apple tree, and once he's up there Jack carves a cross into the trunk of the tree, so that the Devil can't get down. Jack only lets the Devil go when he agrees never to take his soul. When Jack eventually dies, his life has been too sinful for him to go to Heaven. However, the Devil had promised not to take his soul, and so he is unable to go to Hell, either. Jack is now left to wander through the night. He asks how he will see where to go, as he has no light, and the Devil tosses him an ember that would never burn out from the flames of hell. Jack carves out a turnip, puts the ember inside it, and begins to roam the Earth. He became known as "Jack of the Lantern", or Jack-o'-Lantern.

When the Irish took this tradition over to America, they naturally started to use pumpkins to carve, as they were perfect for this.

Back from Printable Halloween Stencils to Free Kids Printables

Head back to Penny Printables where you can find all sorts of free printables. more